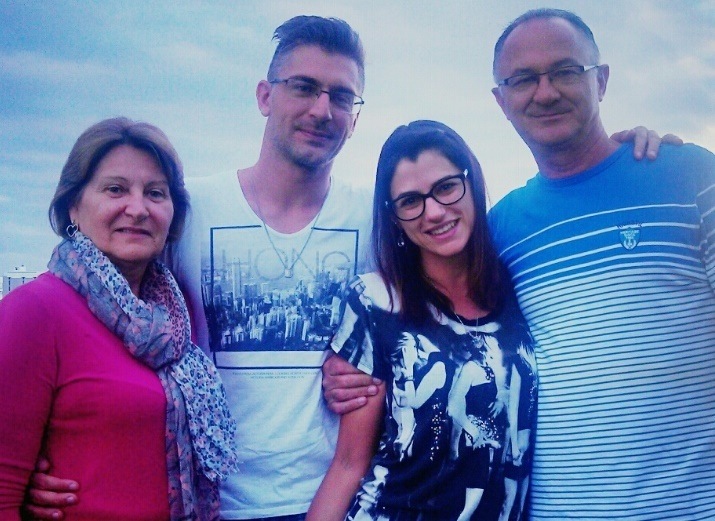 Months of preparation and finally the big day arrived! We left our home, our confort zone to hit the world! It has been 3 months that we’ve left Brazil, but I still can feel all the anxious and fear that I had inside me when I got up in that morning. It was 24th of April 2014, the big day arrived! We stayed awake till late packing the last few things and organizing the only 6 boxes of belongings that we left there. I think we slept just three or four hours and when the alarm went off I could feel my heart beating hard.

Time to shake off the dust and follow a new path. Time to start Love and Road!

At 5am we were still sleepy and speechless. A few days later I realized that I should have hugged Rob’s parents more and should have told them how much I love both and that we are going to miss them deeply. But anyway, I think they already know this.

Let’s go to practical things: 7am our flight took off from Navegantes to São Paulo, that was the first leg of our journey. As most of the people know, flights delays are more than common worldwide, so we decided to arrive super early in São Paulo not to miss the international outbound. There we were, about 10 hours in advanced waiting in the airport. Probably you are thinking that we were a bit stupid to arrive so early, but the truth is that we had only two options: arriving 10 hours early or only 2 hours before the flight. Would you take the risk?

Here comes my first advice: never travel with a tight schedule between flights, unless you have everything booked with the same company and, if you miss a connection, it will be their problem to put you in the next flight.  Be ready to arrive early, drop your bags as soon as the check in starts and afterwards go straight through the security desk. This way you will guarantee that your name won’t be called on speakers and that you won’t have to rush around the terminal trying to find your gate.

Starting a trip in a hurry is unpleasant and unnecessary, leave it for the occasion when you really have to. And trust me, it will happen. One day you will be freaking late!

Back to our journey, we had to spend all day inside the airport. We grabbed a coffee, opened our to do list and started to work. When you are doing a life change project you will have things to be done until the last-minute. So we were calling mobile companies, double checking bank accounts and updating Facebook pages.

At the airport Rob bumped into a good friend of us, Mr. Ricardo Costa, aka “Coivara”. He just arrived from Asia.  We joined him for few beers and got precious tips about Asia and Dubai. It was nice to catch up since he couldn’t make it to our farewell party. Suddenly it was time to dispatch the luggage. Clever traveller do the checking online, and just collect the boarding pass on the self check in kiosks and drop the luggage. Fast, easy and less queuing.

Another important thing: CHECK YOUR LUGGAGE WEIGHT! No one wants to pay extra fees because of your bag is two kilograms heavier than it should be. A simple scale that you have in your bathroom will do the job. If your bag doesn`t stand properly over it, there is a very simple way to do it: weigh yourself first, check the numbers, then get on the scale again holding your bag. Do the math and you will know how heavy the luggage is. It’s a useful tip, because if you are travelling and want to weigh your bag, just pop into some pharmacy and do it!

During our airport day, the best thing we did was to do the check in early. As soon as we got to the boarding area there was a huge queue for the x-ray and passport control. Most of the big airports are like this, be prepared to wait. We could see lot’s of people screaming and complaining that they didn’t know about the queue and would probably miss their flight.

Hand luggage and passport check, just more three hours and we were leaving Brazil!!! Till that moment I could not believe it was true. Me and Rob travelling again!!! And no dates to come back!! Sweet :-))

Boarding started, the crew called for the business class and priority boarding. It was everything on time, through the window we could see the big Air China plane. The walking through the finger till the aircraft seemed to be such a long way. When I got to the airplane door I saw two chinese flight attendant smiling and greeting me in chinese language. That moment I realize that I would have to break the language barrier if I wanted to eat and stay comfortable in that flight.

Incredible, but the crew didn’t speak English, just a few words… The first challenge was the drinks, but that one we passed easily by point out the glass and the wine bottle. Here comes another tip: if you like wine, drink a glass or a small bottle in the beginning of the flight, you will feel more relaxed and asleep: for me and Rob works perfectly. Wine, dinner, one movie… next step, sweet dreams.

Drinks sorted out, then came the dinner. Two rows in front of me I could understand something like meat or fish. That’s it: no menu, no more explanation, just meat or fish. When I announced to her that I would like meat, the flight attendant told me:

Ok! So fish it was. Some kind of rice and fish in a chinese sauce. Not good at all, and I’m not that picky with food. Even Rob didn’t finish his plate. No pictures to show it, we tried to take some, but it just looked like crap.

After a bad dinner, more wine and a movie (Argo, 2012), just love it!!! Time to roll around and sleep. As you imagine, economic class is not that comfortable, especially to Rob and his long legs. But we managed to fit ourselves and take a good nap. When we woke up it was already morning and we were arriving in Europe.

Breakfast time!! I was hopping for something more traditional and less strange. Surprising, we were able to choose, woohoo!!! We could had noodles or omelet. I went for a safe omelet with sausages. Here is the picture to prove that it was Ok, but I have to admit that I had better inflight breakfast before.

Done with eating, it was time to get ready for landing. And now a personal advice: when you have an overnight flight, please freshen up yourself in the morning, as you will talk to people in the airport. At least brush your teeth and comb your hair. You are arriving from a flight, not an earthquake.

Next step was to say goodbye to the cold and silent flight attendants and say “Hola” to the immigration officer!

3 thoughts on “The big day arrived!”